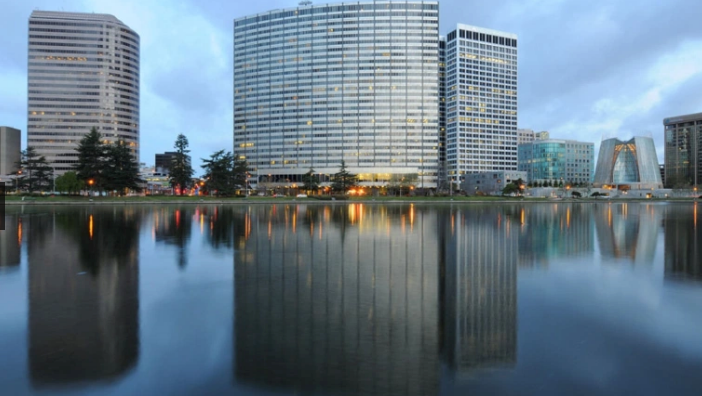 OAKLAND — PG&E has leased an iconic downtown Oakland office tower that’s part of a lakeside complex that veteran developer TMG Partners has bought in a deal expected to provide a major economic boost for the East Bay’s largest city.

TMG Partners has completed its purchase of 300 Lakeside, an office and retail complex that’s perched on the shores of Lake Merritt in downtown Oakland, saying that PG&E has concurrently leased the office tower section of the property. The seller is a joint venture of Swig Co. and Rockpoint Group.

PG&E intends to relocate its corporate headquarters and other operations to the office tower and anticipates it will eventually purchase the highrise, which is in downtown Oakland’s Uptown district, a hub for entertainment, restaurants, nightclubs, and theaters.

San Francisco-based PG&E intends to shift operations to the downtown Oakland tower in phases, the company stated in a recent regulatory filing.

“PG&E intends to use the Lakeside Building as its new corporate headquarters, where it can consolidate approximately 4,500 employees currently spread across the San Francisco general offices and at least two satellite offices,” which both are in San Ramon, PG&E stated in a filing with the state Public Utilities Commission.

The Oakland move could help pave the way for PG&E to create a fresh start after a decade of disasters that began with a fatal gas explosion in San Bruno in September 2010 and included a string of destructive and deadly Northern California wildfires.

“Relocating our headquarters to Oakland is a clear example of our broader commitment to demonstrate real and lasting change at PG&E that will result in long-term benefits for our customers,” said Bill Smith, interim chief executive officer with PG&E.

In recent years, PG&E determined it was becoming too costly to operate out of its headquarters complex in San Francisco.

“The move will reduce our real estate costs, both short and long term, and we will pass along those significant savings to customers,” Smith said. “We’re also excited that the move will bring our employees together in new and better ways that encourage innovation in service to our customers.”

TMG will renovate the office tower so that it will be custom-tailored to PG&E’s needs.

Swig bought 300 Lakeside Drive in 2005. In 2016 Swig teamed up in a joint venture with Rockpoint to co-own the property and revitalize it.

The purchase price was estimated by property and real estate experts to be in the range of $300 million. However, the terms weren’t officially disclosed and the exact price wasn’t immediately known. Eastdil Secured, a commercial real estate firm, helped to arrange the transaction and to secure mortgage financing led by KKR, an investment company.

The University of California and BART are the principal tenants in 300 Lakeside. Both public agencies, however, had previously struck separate deals to relocate out of the offices to other downtown Oakland locations. Without PG&E’s commitment, the Lakeside office tower, which totals 910,000 square feet, potentially would have been vacant.

A huge empty building in that area would have jolted local merchants. Instead, PG&E expects to start moving workers into the tower in 2022.

“The restaurants and small businesses in that area already have borne a huge brunt of the economic impact from the coronavirus,” Field said. “With PG&E, they will have a company that is really committed to the area and will steadily fill up the offices.”

Deals like PG&E’s headquarters move to downtown Oakland hint at a brighter future that would offer a stark contrast to coronavirus-spawned economic uncertainties.

“Hopefully this deal is the beginning of what will be more good news as companies are able to see the future and find ways to get our economies back and operating more normally,” Field said.

Sellers Swig Co. and Rockpoint Group have agreed to retain an ownership stake in 300 Lakeside Drive, even after the purchase deal.

“We are excited to have participated in Oakland’s recent revitalization and feel that PG&E’s substantial commitment to 300 Lakeside speaks to the East Bay’s increasing desirability as an attractive place to work and live,” said Aric Shalev, Rockpoint Group’s managing member.