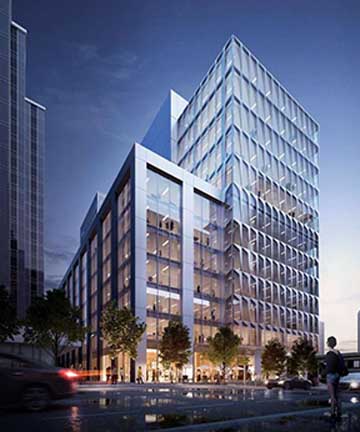 By Roland Li for the SF Chronicle

The company will occupy the entire 265,890-square-foot office portion of 633 Folsom St., a 12-story building near Second Street that is being renovated and expanded. It’s expected to open next year.

Asana, which provides tools for tracking workplace goals and project scheduling, has 450 employees worldwide, with the majority in San Francisco. It plans to grow to 700 by early next year. The new office has space for around 1,500 employees.

An Asana spokeswoman said the company sought a central location with access to public transit for its new headquarters. Asana’s current office is farther south at 1550 Bryant St. Plans for that location weren’t disclosed.

The company’s customers include more than 60,000 companies and organizations in 195 countries, including Uber, Airbnb, Disney and NASA. That’s up from 20,000 customers in 2017. Investors valued Asana at $1.5 billion in its latest fundraising round in November, when it raised $50 million.

The Swig Co., one of the city’s oldest developers, built 633 Folsom St. in 1967 and started construction last year to add five stories, a new facade and interiors to the building. The project includes 5,650 square feet of ground-floor retail space, along with a new plaza.

“We started with completely overhauling the building’s environmental systems while designing a new facade that will increase the number of hours of daylight for the interior,” Manan Shah, a principal at Gensler, said in a statement. He said the building’s ground floor will be more accessible to the public after the renovations.

Swig Co. benefited from the city’s minuscule supply of office space. At the end of 2018, San Francisco’s office vacancy rate was at 4.1 percent, the lowest level since 2000, according to brokerage CBRE, which represented both Asana and Swig in the lease deal.

“There’s a lot of demand. There’s not going to be very many deliveries” of new offices, said James Carbone, CEO of Swig. “It’s probably the healthiest it’s been, maybe ever.”

Carbone declined to disclose Asana’s rent. He said asking rents were in the mid- to high $90s per square foot annually. That is comparable with new office towers in the Transbay district.

633 Folsom St. was one of only two major San Francisco office projects under construction that didn’t have tenants.

The other is Oceanwide Center, which will include the city’s second-tallest tower. However, real estate sources told The Chronicle that Chinese developer Oceanwide is seeking financing or a new capital partner for that project.

The city’s next wave of office projects, as well as new housing, is planned in the Central SoMa plan area, which is next to 633 Folsom St. But multiple lawsuits calling for more environmental studies or changes to allowed building heights could stall projects and further restrict the city’s office supply in the next few years.

“I hope that they can resolve whatever issues exist with the Central SoMa plan,” Carbone said. “In order for the San Francisco economy to thrive, we need to deliver all of that. We need more housing. We need offices.”